Project Sponsors
(Big thanks from everyone!!)
***Page under construction. Many more sponsor listings to come!!!***

City of Glenwood Springs; Giving us the funding and the support needed to go as far as we have! www.ci.glenwood-springs.co.us

Garfield County, Colorado; a critical piece of our support web and funding
www.garfield-county.com/home/index.asp

Glenwood Springs Chamber of Commerce; thank you for the support and help www.GlenwoodChamber.com

Build the Park Yourself!
Feel the gratifying sense that you’ve accomplished something useful! Click on image below to build the whitewater park yourself! 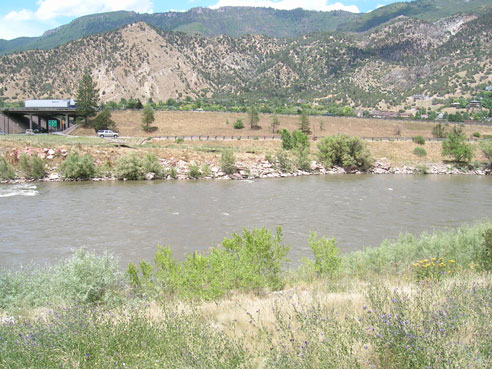 Skip all the meetings, fundraising, and construction! Do multiple years work with one click!

Where is the park? View satellite maps/imagery

Hey, even if you are a poor kayaker, at least you don’t have to sound like one.  Impress your girlfriend (or boyfriend) by creating the impression that you know what you are talking about! Brush up on your playboater lingo and diction and be the armchair rodeo star on the banks of the Glenwood Springs Whitewater Park.

Blunt- The staple of a wave rider’s repertoire.  A vertical carving turn performed on the face of steep wave.  Really good blunts can find you several feet in the air.

Boof- Paddling briskly (and with well-timed technique) to skip off a steep drop and launch you (hopefully) past the ensuing hydraulic at its bottom. A vigorous chunder (see subsequent entry) awaits should you fail at proper execution.

Cartwheel- Whee!  Vertical or near vertical rotations until you puke!  How many can you tolerate? This self-explanatory maneuver barely even nets points in today’s modern scoring system.  Also known as “throwing ends”.

Chunder- Ever been jealous of your Sunday laundry?  Powerful river hydraulics can give you that spin-cycle experience you always been curious about.

Flat spin- can you say old school?  While definetely not as ancient as the pirouette or the ender, this trick is definitely yesterday’s news. Still good fun, and well-worth mastering to spice up any bag of tricks.

Gaper- c’mon we all know one of these.  A gaper is anybody who calls a loop a “flip” or has a $429 AT bent shaft paddle but holds it upside down.  Also, anybody that yells from the bank, “How ‘bout a roll squirt?” certainly deserves this prestigious designation.

Loop- Fully aerial front flip initiated by driving your bow into the green water of a steep hole and throwing your weight aggresively forward as you rocket upward.  Impressive, but does not carry the clout that it once did. Comes in “front” and “back” varieties.

Lunar Orbit- Sputnik did not orbit the moon but you can upon mastery of this Eric Jackson invented maneuver. Spinning, crossgrain, cartwheel-flip might describe it best.

McNasty- Another in the crowd of cutting edge tricks guaranteed to receive “ooos” from the crowd if performed correctly. Switch stern blast 360 into front loop combination.

Overly-retentive- any hole or wave that holds you for multiple tricks even if you are ready for it to let you go. (related entries: retentive, sticky, window shade, chunder)

Phonics Monkey- A rare species of river monkey (Lophocebus Kayakus) that lives along rivers and streams in Colorado and other paddle-friendly states.  Prefers to live on or near local whitewater parks or surf holes of other varieties.  Okay, okay. It’s actually a retentive crossbow-initiated pirouette into a front loop. (If you see anyone actually perform one, they deserve a good pat on the back).

Retentive- A hole or wave that is sticky enough to allow for multiple tricks per ride. (related entry: overly-retentive).

Sic- Not certain how this term came into being.  Scholars maintain the etymology was lost centuries ago.  Loosely interchangeable with the words “awesome” or perhaps “amazing”.
(Editors note: No animals were harmed in the creation of the sentence “that guy threw a sic phonics monkey dude.”)

Side surf- Surfing sideways.  Did you really need someone to explain that to you?

Space Godzilla- Its okay, don’t panic.  This term has nothing to do with early-90’s Japanese film.  The space Godzilla is a trick normally (at least by me) performed on accident when a poorly executed loop goes wrong.  Seriously though, this is a legitimate trick. Sort of an aerial cartwheelish, flippy thing with a twist.

Sticky- Ever accidentally coated your fingertips with aquaseal while trying to repair that pesky drysuit gasket?  Imagine a river wave with giant, gnarled fingers, coated in aquaseal (or sometimes superglue) and those fingers are securely fixed around you and your kayak. At higher levels of this designation, zealous prayer might be your only hope for escape.

Unintendo- The unintentional performance of a spectacular rodeo maneuver (or if you’re really unlucky: multiple maneuvers) in a sticky (see previous entry) hole, only to roll up and find yourself still caught in the guilty hydraulics’s grasp.

Window shade- Highly technical term used to describe the maneuver of multiple, unintentional, retentive rolls in a sticky hole or hydraulic.  Not usually a pleasant experience for the victim; though people on shore often vigorously cheer while the action is being performed (victim remember: the spectators are not cheering for you).  From the victim’s perspective it feels much like this: sky, water, sky, water, sky, water and can repeat indefinitely until victim decides to cut their losses and punch the eject button.  (related entries: chunder, unintendo, sticky)

Throw Down
Show Down

Check back here for up to date parking information

Biking to the park is strongly encouraged! 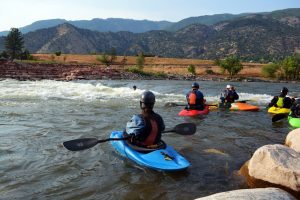